I’ve decided “nesting” takes on a whole new meaning when you are planning a homebirth….with a photographer. I tell you, I wanted my house – my birth space – to be as clean and organized as possible. I cleaned and dejunked and decluttered for months leading up to being “nine months pregnant”. I literally scrubbed my kitchen floor (suspicious I was in early labor) the night before Baby was born, and said “There! Now the baby can be born!” If you read my last post, you know I plan my photo shoots and yes, I wanted my birth to be as photogenic as possible. Sound ridiculous? Lol, it’s not entirely, because it IS good to know what you want. The only problem is babies come when they come, which may not always be when the lighting is perfect. I wanted good light – I wanted a daytime birth. I also wanted nice weather, preferably warm-ish with no wind. If it was a nice day, maybe I could go for a walk or labor outside for a bit, because I love being outdoors. I envisioned beautiful peaceful laboring photos in my backyard. (This also meant I was cleaning and organizing the inside of my house and the outside – my backyard. If that’s not exhausting for a 7-8-9 month pregnant woman then I don’t know what is!) But when the time came, when I knew it was real labor… it was the middle of the night and the super high winds from the day before were still lingering as a strong breeze. I labored and labored thinking maybe I’d make it until sun-up. When it became clear that that was not going to happen, we got the living room ready and made phone calls to the midwife and the photographer. But then it became even clearer that I had waited too long to make those phone calls and the baby was born before either of them got here. I probably should’ve told my husband to get out the camera earlier, prior to the birth, because even we didn’t think to do so until about 10 minutes after birth. So, we have no laboring photos – although we do have video and if you see me personally, I’m willing to share – but we have plenty of after photos.

This is my oldest daughter. She was so excited for the baby to be born and to help out at the birth. For weeks, she would leave for school and remind me NOT to have the baby without her, and if I went into labor while she was at school, could she come home early to be here. Of course I said yes to that! She was awakened at about 4:30 or 4:45am and baby was born at 5:18am. She did very well. She was slightly nervous for me, but I reminded her pushing a baby out is hard work! Later she got to cut the cord, which her face in this photo says it all!!

Two of my babies have come out with squashed noses. It’s ok, we don’t mind. They straighten out eventually.

I actually had called Child #4 “Baby” since she was born, so when we started talking about the baby in my belly, I had to make serious efforts not to call her “Baby” anymore. She was so cute, always hugging or kissing my belly, and she too was excited for the baby’s arrival. However, with her only being 3, I was concerned how she would accept her new brother or sister. So, when I handed the baby off to the midwife for the newborn exam, I specifically picked her up and held her. 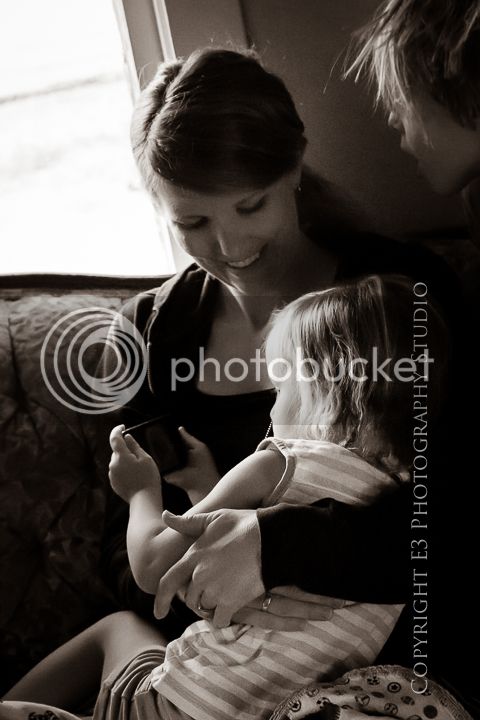 Does this melt your heart, or what???

Our super-cute midwife, Margie, taking a photo for herself.